Natasha Khan, aka Bat For Lashes, delighted us with her 2006 debut, Fur & Gold for the marvelous combination of electronic arrangements and antique unknown instruments, such as the marxophone. In her follow-up, Two Suns, she continued using these techniques, but adding a peculiarity: Pearl, her alter-ego which gave double feelings of strangeness and an edgy sound to her music. Three years later, she is releasing The Haunted Man. Which is the difference between this album and her previous ones? A huge dose of hypnotizing charm.

Her first advance track, Laura, which can only be found in the special edition, immerse us into a simpler and fragile side of Khan. Though it is quite different to the rest of the record, led by a lonely piano, it showed us that on her new material we were going to discover a deeper side of her. And that is exactly what you get when you listen for the first time the breathtaking Lilies. The violins, which appear several times in this album, give a bright spirit to the melody which then evolves astonishingly into its maximum climate when she heartbreakingly sings in her already known high pitched tone: “Thank God I am alive!” All Your Gold was the second song we could listen to and the more I do, the more I think it is perfect to be a single, since the rhythm helps to make your feet move along and soon you’ll be failing at trying to sing: “There was someone that I knew before, a heart from the past that I cannot forget.”

There hasn’t been a big change musically. However, this is the first time that it seems that the real Natasha Kahn is being completely exposed, which is surprising since this probably contains her more upbeat and danceable tunes. Throughout her career she has maintained the vibe of a mystic ritual at midnight – or at least that is the metaphorical atmosphere it transmits to me– which is formed thanks to her howling voice and the constant contrast of synthpop used in an unusual way. This is spotted clearly in the percussion, which includes drums machines, maracas, timpanis and even bells.

One of the things that called my attention was the male vocals, which she previously tried exploring with Scott Walker in The Big Sleep, from Two Suns. But this time they are featured in a different and much more interesting way. In the title track, the male vocals grow intensively, intermingling and supplementing each other, until she finally blooms into, “Still I’m holding in my hand, standing by my haunted man”; with the orchestral instruments and a marching drum that reinforce her to sound passively passionate.

With The Haunted Man, Bat For Lashes confirmed her place in the music scene: to be a mysteriously enchanting goddess. Fading slowly away in Deep Sea Diver, she leaves us satisfied with a gently glowing mood hoping she is back soon with more of her magic. 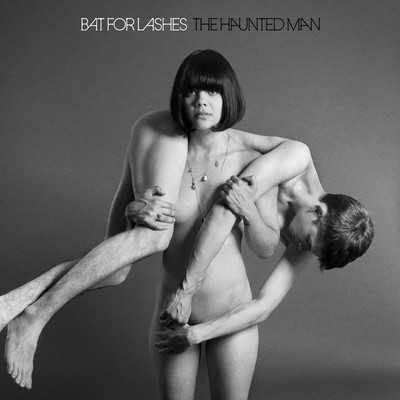