With their cheerful and fun tunes and a beautiful lady dancing tap throughout their concerts, Tilly And The Wall has brought to the Indie scene colorful and cheerful music. However, their albums, though they had good tracks, always seemed to lack something and it was easy to realize that they could give a lot more. Four years after O was released, Heavy Mood differentiates from what they have done before for its strength and energy.

You put on the record, hear some yelling and weird noises and suddenly, a strumming guitar starts. It almost feels like you are in the middle of a wild party surrounded by the ritual voices and thrilling percussions. When the song finishes you are exhausted and eager to listen to what’s next. Summed up, a perfect opening song for this album which never abandons this constant state of ecstasy and excitement. In this track there are explosions of joy and positive emotions that are accompanied by the lyrics as when singer Kianna Alarid starts screaming: “Love riot, let’s do it right, we won’t be quiet!”

Although Jamie’s tap dancing isn’t as evident as on their previous albums, they were successful at combining it with other types of percussion which aren’t necessarily always drums. There are still some moments in which she stands out, as in the song Static Expression, in which the band goes back to its routes and sing in chorus those gentle songs, at which they are experts at.

There are other songs, however, such as I Believe in You, that though they give a break to this constant craziness, they also distance you from the atmosphere of the record for their exceeding sweetness. But as soon as they return to this mightily enthusiastic atmosphere you are involved again into their carnival to finally finish the record with the passionately crazy Defenders. Joined by a chorus of kids, Tilly & The Wall gives lessons to protect yourself and to be brave in life identifying with the listener by saying: “we’ve got nothing to fear ‘cause we aren’t afraid to die, we are not afraid of anything, we are not afraid to be alive”.
Heavy Mood is indeed another step up the ladder for Tilly & The Wall and depending to what they do in their future, it can act as a transition album. This is a change that was worth it: by squeezing all their potential they were able to give songs that act like injections of energy. For this reason is that they were able to make a persuasive and solid album, being able to maintain their positive spirit. 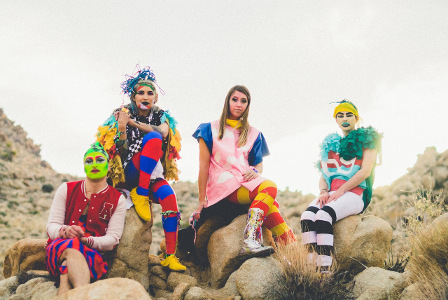